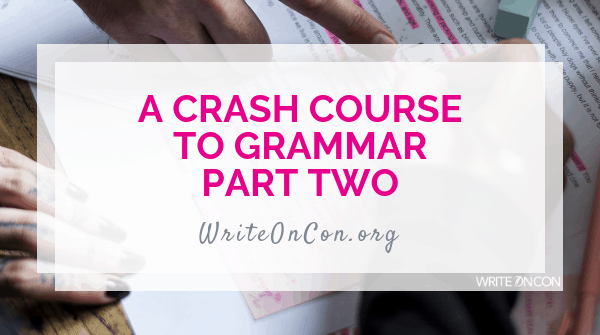 A Crash Course to Grammar for Writers: Part 2

Last week, I went over some basic grammatical rules. For part two of this series, here’s a cheat sheet to some more common mistakes.

1) For dialogue, punctuation goes inside the quotation marks. Dialogue tags (“he said,” “she said,” “they said,” “the pterodactyl said,” etc.) following dialogue should be in lowercase, even if the punctuation with the quotes is a quotation or exclamation mark. This is because the dialogue is not a separate sentence, but within the same sentence:

2) Note that the rule above applies to dialogue tags, i.e. a clause noting the speaker. If dialogue is followed by “stage directions” that are NOT dialogue tags, what you have is actually two separate sentences, which should thus be punctuated accordingly. So use a period instead of a comma within the quotation marks and capitalize the next sentence:

“I never want to see you again.” The chiropractor’s eyes filled with tears.

3) For em dashes or ellipses, the general rule above typically applies. However, if you have a “stage direction” breaking up dialogue, use em dashes outside the quotations: So:

4) If you need to use quotation marks within dialogue, use single quotations:

“He told me he couldn’t marry me because I’m ‘too difficult’,” Bob complained to the bartender.

5) Finally, DO NOT use quotation marks for emphasis! Even “scare quotes” actually have a specific function: they’re ironic, i.e., they imply that the thing in the scare quotes aren’t actually that thing at all. For example:

Willa was sick of her “friends”, with their backstabbing and their mind games.
This sentence suggests that Willa’s “friends” aren’t actually her friends. This makes sense here.

Willa was sick of school and learning from “books.”
Willa might have a legitimate critique of the educational system, but presumably she is not suggesting that the books in question are not actually books, which is what the incorrect quotations here would imply.

For singular nouns, the quotation goes before the -s: “Jamie’s”, “Dad’s”. If the noun ends with an -s, put an -s after the quotation: “Jamie’s”, but “James’s”. For plural nouns, only use one -s and put the quotation mark after it: “dad’s” for one dad, “dads’” for multiple dads.

What’s wrong with this sentence?

Rotting and stinking to high heaven, the inspector examined the corpse.

Perhaps the author intends to suggest that the inspector is suffering from necrotizing fasciitis. More likely, they meant that the corpse is “rotting and stinking to high heaven.” A misplaced modifier is a phrase that, because of its placement, accidentally modifies a different word or phrase from the word or phrase it’s actually supposed to apply to. This is a very common mistake, but it’s easy to fix if you’re aware of it:

The inspector examined the corpse, which was rotting and stinking to high heaven.

1) An apostrophe represents a contraction, i.e. an abbreviation of two words into one word. So It is = it’s, you are = you’re, they are = they’re. It’s a trap! You’re a doofus! They’re here!

2) Its, your, and their, on the other hand, are all possessive. “I love the mall because of its air conditioning”; “Your dog is peeing on my leg”; “Their spaghetti is moving.” To remember “their” vs. “there”: remember that the possessive “their”, like “your” or “her”, ends with an -r.

You use lay when modifying a direct object, and lie when you’re not. Christian is lying in bed, but Christian lay Ana down on the bed. You lay the dishes down on the table, but dirty dishes are lying around the house.

Annoyingly, the past tense of lay is laid, but the past tense of lie is lay (“She laid her dirty clothes everywhere”; “She lay in bed all day”). The past participle of lay is also laid (“She had laid drop cloths on the floor the night before), but the past participle of lie is lain (“She had lain on the floor and cooed ‘Paint me like one of your French girls’ the night before”).

What are some grammar rules you could use help remembering?