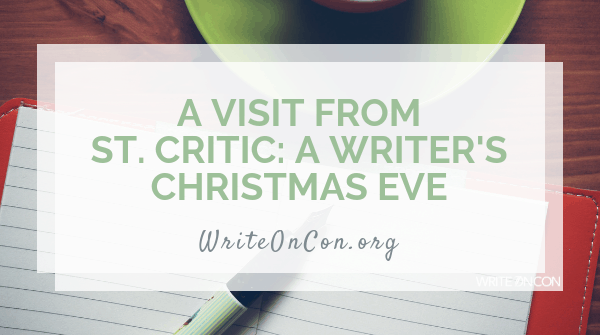 A Visit from St. Critic: A Writer’s Christmas Eve

A Visit from St. Critic: A Writer’s Christmas Eve

~with thanks & respect to Clement C. Moore’s original, A Visit from St. Nicholas

‘Twas the night before Christmas, when all through the house

Not a keyboard was stirring, not a pen, not a mouse;

The manuscript was printed by Yours Truly with care,

In hopes that strong edits soon would be there;

The children were nestled all snug in their bed;

And mamma with her red pen, and I in my cap,

Had just settled our brains for a long writing recap,

When out on the lawn there arose such a clatter,

I sprang from my desk to see what was the matter.

Away to the window I flew like a flash,

Gladly fleeing my writing that now seemed like trash.

The fear in my breast of my revisions so slow,

Gave a lackluster mien to my project mojo,

When what to my wondering eyes did appear,

But a miniature sleigh and eight tiny reindeer,

With a little old scrivener so lively and quick,

I knew in a moment he must be St. Critic.

More rapid than rejection his coursers they came,

And he whistled, and shouted, so I’d heed them by name:

On Plotter! On, Pantser! On, Darlings and Theme!

To the top of the porch! To the crux of the hook!

Now en-dash and em-dash… away to this book!”

As metaphors that inside a writer’s brain fly,

When they meet with approval, mount to the sky;

So up to my office the coursers they flew

With the sleigh full of stets, and St. Critic, too –

And then, in a twinkling, he read my dear tome;

The editing and scrawling of that wordsmithing gnome!

As I drew on my patience, holding writerly ground,

Down the pages St. Critic scanned without sound.

He dressed down my work, from header to foot,

A bundle of blank contracts he had flung on his back,

And he looked like a peddler with sales that don’t slack.

His eyes – how they twinkled! As he rechecked my query.

His cheeks got quite rosy, but his face grew less cheery.

His droll little mouth was drawn down to a glower,

And his bearded jaw clenched as he mulled for an hour;

The stump of a pencil he held tight in his teeth,

Yet he typed out the options he soon might bequeath;

He was clearly broad-minded with a well-rounded soul

That weighed my life’s work and my marketing role.

His portfolio was plump, a right fruitful old elf,

A wink of his eye and a twist of his head

Finally gave me to know I had nothing to dread;

He spoke not a word, but went straight to his work,

And filled out a contract; then turned with a jerk,

And laying a finger aside of his nose,

And giving a nod, he accepted my prose;

He sprang to his sleigh, to his team gave a whistle,

And away they all flew like a best-selling epistle,

But I heard him exclaim, ere he drove from our sights–