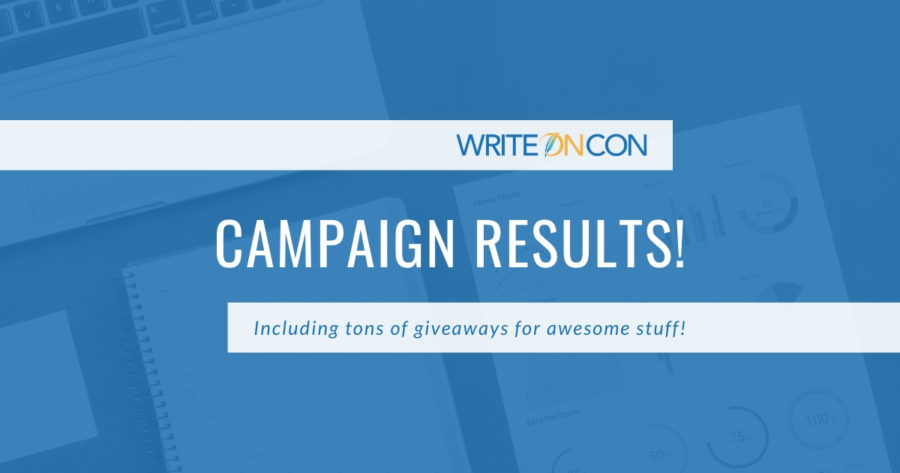 We’ve reached the end of another fundraising campaign. Thanks to you, WriteOnCon raised over $16,000!

Over 300 items were sold, and almost 40 listings completely sold out. We’re blown away by your support over here at WriteOnCon HQ. Of the services purchased, 85% of the funds raised goes right back to the critiquers, The rest goes toward operating costs for the conference in February, as well as paying our staff and providing honoraria to our speakers.

If you’re one of the lucky buyers of a critique, make sure you reach out to your critiquer to work out timelines! Here’s a link to the redemption instructions.

While critiques are no longer available, registration at regular price still is! Sign up at this link for General, Full, Extended, or Time Traveller Admission. And if you’re feeling generous this holiday season, consider sponsoring admission for a writer in need!

Thank you to everyone who contributed to our fundraising campaign! Everyone who bought an item was entered into a raffle for some amazing prizes, like ARCs, hardcovers from our speakers, swag, and even more critiques! We’ve tallied the results and pulled the names, so without any further ado…

Henry Herz, How the Squid Got Two Long Arms

Susan Kralovansky, The Book that Jake Borrowed and There was a Tall Texan

Alyssa Hollingsworth, ARCs of If We were Giants, Midnight on Strange Street, and Birdie and Me

Janae Marks, signed copy of From the Desk of Zoe Washington

Lindsay Lackey, All The Impossible Things

Alyssa Hollingsworth, ARCs of The Dark Matter of Mona Starr and The Winter Duke

Claire Kann, signed copies of Let’s Talk About Love and If it Makes You Happy

Jessica Burkhart, Life Inside My Mind

Jessika Fleck, signed copy of Beware the Night and ARC of Defy the Sun

Kim Smejkal, ARC of Ink in the Blood + swag

M.K. England, signed copies of The Disasters and Spellhackers

Sara Raasch, set of These Rebel Waves and These Divided Shores

Everyone who participated in the campaign already has Full Admission. Did you miss out on the campaign but still want to join the conference? You can!