A journey across galaxies, past monsters and arguments, as Alex and Cardinia, 16, battle to save their planet

A journey across galaxies, past monsters and arguments, as Alex and Cardinia, 16, battle to save their planet
Hello! My name is
Don
Young Adult
High Fantasy Right Now Soft Sci Fi 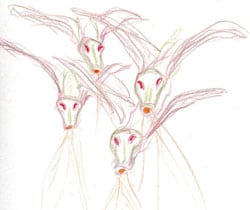 Hi, my name is Don Losure. I’m married to a writer (Mary Losure, who primarily writes narrative non-fiction for ages 10 and up). Our two Lord-of-the-Rings-loving sons are passing a love of reading on to their children.

I write fantasy that includes elements of soft sci-fi. Cuttlefish can control their pigmentation. What if we could do that? Muscles in the sides of our heads are left over from when our ancestors could swivel their ears. A shame we gave that up. Shadows in black and white photos have possibly yielded evidence of other dimensions. What if we could manipulate those?

When not at a keyboard playing with my imaginary friends, I enjoy gardening, hiking, backpacking, canoeing, cooking, and reading. I travel with Mary and act as her photographer on research projects.

I love well-written nonfiction that puts a reader in another time or place. Books like The Hemlock Cup by Betany Hughes, The Greatest Knight by Thomas Asbridge, The Structures of Everyday Life by Fernand Braudel, and many others.

My favorite author as a child was Jules Verne. More recently I’ve enjoyed Terry Pratchett’s Disc World books, Harry Potter, of course, The Hobbit and The Lord of the Rings trilogy. Other favorite authors are Neil Gaiman and Neal Stephenson.

Forced to flee his home planet, Kavredaran, several years ago, 16-year-old Alex Wyverson lives in hiding on a strange planet (Earth). Life has taught him to trust no one. A young witch, Cardinia, summons him into the war to save Kavredaran from an invasion by dragons, pyrklauws, and other monsters. The miscreant sorceress, ahem – friendly witch – is way more stubborn than Alex thinks necessary, but together, they learn to fight the mastermind of the invasion, a powerful Passage Master named Terrel, and save the planet.  Alex Half-Witch is a journey across galaxies, past monsters and arguments, as a sixteen-year-old boy learns to deal with witches and dragons – who may not be what they seem – while finding friendship, a place to belong, and possibly even love.

Chapter One – On a Strange Planet

Alex Wyverson scanned the star maps lining the walls in his upstairs bedroom, tracing one particular route with his eyes. Heaving a sigh, he turned and sat at his desk, facing the window, to open his favorite book, Starways Across Galaxies, Osric and Yindi’s Complete Travels, to that hideous picture: pyrklauws. Those creatures devoured everything but stone. Every planet they infested became a dead rock in space.

Covered in gray scales, pyrklauws stood on two legs. Beneath dirty yellow eyes, their faces bulged into short, alligator-like snouts over mouths filled with flesh-ripping teeth. Flames blazed along the inside curves of retractable claws on their fingers. They didn’t have many spells, but they were masters of illusions. To infiltrate a population, they scanned selected people’s minds. Then they ate their victims and impersonated them perfectly.

Alex closed his book and looked out at maple trees swaying in a light breeze while cardinals’ loud calls punctuated chickadee and sparrow chittering. His family were Passage Masters, able to open portals without predefined anchors. No generation had more than a few such people. They led interplanetary explorations and expeditions to protect their planet. That’s where he should be right now, roaming the stars, protecting his home planet, Kavredaran. Instead, he was stuck here, living in hiding on this backwater planet, Earth.

I’ve written a few short stories and am working on a sequel to this book.