Dark YA Fantasy feat. Bodies Creating Magic and also there is an F/F Romance 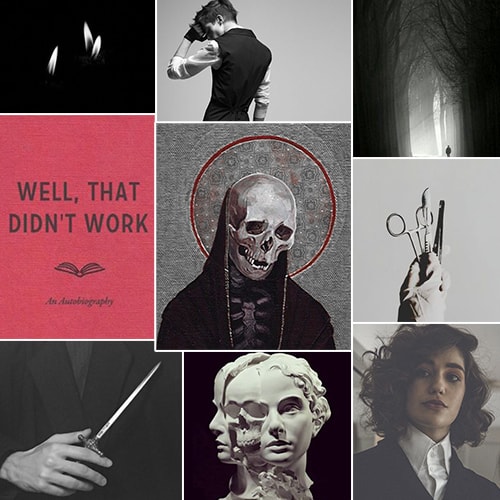 Hello! I’m a 28 year old writer of dark speculative fiction for YA (and occasionally adult) audiences. I currently live in Florida with a a tiny chaos toddler, and I work for a coroner.

I’ve had an agent before, but we parted ways a few months ago when she stopped repping my genre, and I just dove back into the query trenches with my current idea a few weeks ago. I’ve already revised this book a lot and am hoping that querying it goes well, but would love to meet some writer friends and critique partners who might not mind reading it in the future if it doesn’t get picked up, so I can do another round of revisions with even more eyes on it. If you like dark books with morally gray or unlikable characters, then say hi! I love beta reading, and would be happy to swap a few chapters to see if we might be a good fit as critique partners for current or future projects.

Aside from reading and writing, I love baking and video editing. Idk. I hate how formal it always sounds talking about yourself in things like these. Pls be my friend I am an okay person I think?!?

Anything dark and spooky! I also love the rivals to lovers trope, YA stories where the adults aren’t all dead or absent, morally gray characters, and unique fantasy worlds. Recently I read and enjoyed WICKED SAINTS by Emily A. Duncan, and I love work by Julie C. Dao and V.E. Schwab.

I don’t love books that take place on boats or at sea. I have no clue why; they just aren’t my thing. I’d still love to be writing friends! I just might not be the best person to critique a book that takes place on a boat.

Khent can create light with a coil of intestines and bring pestilence with one set of lungs. To resurrect her father, she needs the body of the traitor who killed him. But when Khent goes after that man she finds only his corpse, its organs removed.

Aran is an apprentice training to take apart the city’s dead and allocate their organs for magical use. But he can’t pass his exams, and his true passion is researching resurrection. For findings flashy enough to overshadow his failures he’ll need irrefutable evidence, and Khent’s reclusive mother is the only person audacious enough to claim to be resurrected.

When Aran meets Khent, they strike a deal: if Khent will let him interview her about resurrection, Aran will take her into the Examiner’s Office to find the body she needs. But the darkness of Khent’s magic tempts Aran to try spells of his own. As he plunges deeper into Khent’s world, Aran realizes that through magic he could present his prestigious research and graduate his apprenticeship, but it might cost him his only real friend. Meanwhile, the more Khent works with Aran, the less dark magic makes sense. But corpses decay. If she loses focus for too long, she’ll never see her father again.

Rumor had it, Khent’s father had carved his real name on one of the trees in Jasperwolf Forest.

She pressed her palm against rough bark, but it didn’t tell her anything. The trees never did. They stretched high, turned their faces toward the sun, the leaves whispering their secrets to the sky.

No one knew her father’s real name. No one had earned the right.

He had plenty of monikers. His favorite was the God of Death, though he only used that in front of the Council. Lutto was a close second-favorite—not as many words, but still nightmarish. In a long dead language, it meant one who brings mourning.

Lutto had loved the fear, the rippling whispers when he entered a room. The way his title seemed to supersede even the power of the Martyrs.

He’d relished the way people choked out the only name they knew for him as they died.

It was that same love that led him to curse Khent’s name.

Anyone who dared whisper it would live just long enough to feel their spine rip through their skin, and be dead by the time the rest of their bones piled at Khent’s feet.

But Khent’s father had been dead for three years.

Sometimes she wished people would try to say her name so she could watch them fall apart, proof that beyond the grave, her father persisted.

I hope to keep writing more dark fantasy full of complicated characters! I also co-author books with a writing friend that are just as dark but with 500% more banter and cinnamon roll characters, as well. Basically I just love writing speculative fiction. I’m really hoping that this year I’ll be able to write and revise a few different stories so that I can keep pushing forward in my writing career, and I’d love to meet other people who feel similarly.