For Whom The Rose Quartz Glows is a contemporary fairy tale set in a theme park where magic comes to life.

For Whom The Rose Quartz Glows is a contemporary fairy tale set in a theme park where magic comes to life.
Hello! My name is
Kristen
Young Adult
Fantasy Urban/Contemporary Fantasy Romance 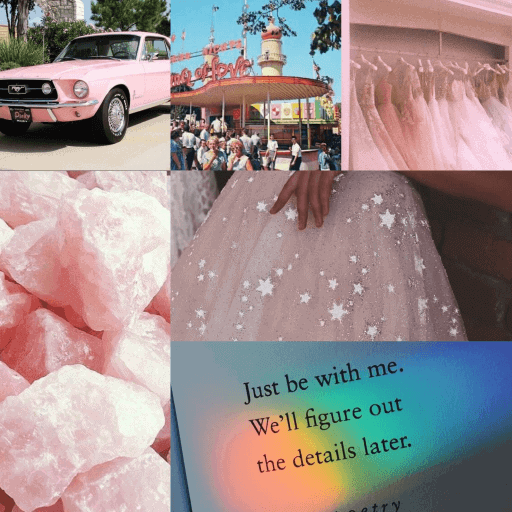 Hello! I’m a YA fantasy author who’s also taken an interest in contemporary lately. When I’m not writing, I’m testing a new plant-based recipe or scrolling through Depop.

I love contemporary fantasy, but anything with a well-rounded female protagonist will pull me in. I’m always down for a good thriller, too. My favorite authors include Maggie Stiefvater, Melissa Bashardoust, Kathleen Glasgow, and Kara Thomas. My favorite tropes are enemies-to-lovers, fake dating, and anything having to do with fame.

I’m not a fan of the “teenagers save the world” trope present in Divergent. I’m also not a fan of murder-happy protagonists or anything having to do with war.

The enchanted theme park Princess Brylynn Harlowe calls home is far from a fairy tale. The power running through the royal family’s veins fuels the dark marvels of Wonder Island. Every generation, the monarch must sacrifice their life to keep the kingdom’s magic alive, and after Brylynn’s eighteenth birthday, she’s destined to become queen — because her father is destined to die.

The Ritual of the Eighteenth Year, a traditional ceremony for finding true love, is a rite of passage for every teenger on Wonder Island, but for Brylynn, it’s a matter of life and death. She isn’t willing to join Wonder Island’s vicious cycle of sacrifice. In an attempt to subvert her own destiny, she tricks Asher Jakobs, the son of her father’s arch nemesis, into believing he’s her soulmate.

Brylnn draws him into her twisted politics and pretty lies with the promise of true love at the end. However, her feelings for Asher grow as her coronation day draws near, and she wonders if fate has drawn them together for a greater purpose. Now, her only hope to save her father — and herself — may be to destroy the very magic she’s sworn to uphold…the magic Wonder Island needs to survive.

Complete at 72,000 words, FOR WHOM THE ROSE QUARTZ GLOWS is a contemporary fairy tale set in a theme park where magic comes to life. It is a standalone young adult fantasy with series potential. The novel has the dark spirit of Melissa Albert’s The Hazel Wood with the immersive world building of Brigid Kemmerer’s A Curse So Dark And Lonely.

I currently write for BuzzFeed, and my short fiction has been published in The Fantastic Other. I am pursuing an MFA in Creative Writing with a focus in young adult from Southern New Hampshire University. You can find me online at https://kristenharriswrites.wordpress.com/ or on social media as @kristenhwrites.

Wonder Island was Disneyland on dialysis, all the marvel filtered out. The island was man-made, or rather, magic-made, drummed up into a mountain of dirt and palm trees the minute Brylynn Harlowe’s two-greats grandfather decided the future of magic lay in monetization. He named it Wonder Island and crowned it with the most fantastical amusement park in the world. However, magic was a finite resource on the island, and after a hundred years, their supply was running out.

Shining over everything else, Harlowe Manor crowned Wonder Island like a vintage Happy Meal toy at a yard sale, its princess the prize at the bottom of the cereal box. From the thirteenth story of the manor, Princess Brylynn glared down at the kingdom she was destined to die for.

Plastic kazoos and tambourines rattled the air flowing into the window of her tower-topper bedroom, anticipation growing for the princess’s Ritual of the Eighteenth Year. Tomorrow, as her two-greats grandfather prophesied, she would find the true love destined to help her usher in the Age of Endless Magic. Upon her own child’s wedding day, Brylynn would cross through the Doorway and into the Land Beyond, using her life to unlock the source of the kingdom’s magic forever.

Shielded behind the smoke and curtains, she studied the park goers, imagining herself with no more worries than one of the little girls in the trademarked blonde wigs identical to her own. Princess was a game to them, not a century-old death sentence.

I’ve outlined a more thriller-like YA fantasy as well as a contemporary romance. In the future, I want to explore genre-blending YA fantasy.