I'm a young adult writer who loves writing about LGBTQA+ and Jewish things. 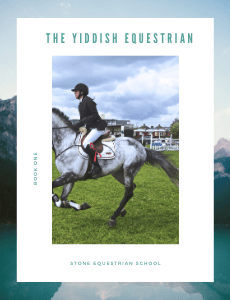 I write about Jewish and LGBTQA+ characters in various situations. I love writing horror and thriller.

My non-writing hobbies include riding, photography, and hiking. I love animals.

Genres I love include anything YA that doesn’t have a central romantic plot. I prefer to read LGBTQA+ books and books with representation in them.

I don’t like the romantic genre, but I do love romantic subplots if they’re done well because I’m a romantic at heart. I don’t like reading books with abuse (of any kind) in them or sexual harassment.

She wasn’t on her horse. Instead, she was propped against the bleachers, one hand wrapped around Handle’s blue lead-line, the other scrolling through Youtube, watching a video about dressage.

She didn’t hear the girl’s name announced, but she looked it up in the after-wake.

She wanted to say all she heard was the crunch of bone on wood, but that would be a lie.

A lie she’d later tell. She didn’t like to discuss it. The truth was, she saw every second of it.

The horse was white-grey, with black eyes. His black spots speckled in the sunlight. She could see his eyes, which were steady. It was drizzling now, lightly, and there was some rain reflecting off his eyelashes.

The horse caught it with his left hind, and the jump was solid wood. The jump didn’t collapse. His rider did, though. A quick succession of crumpling limbs, falling towards the ground, in what wasn’t slow-motion, not like the movies.

In the local news, the sports journalist would write how she wished there was something to blame, some outward cause. But it was nothing. Just uneven footing. The ground was grass, and there was a hole.

Maybe someone would have caught it on a walkthrough. An intern might have spotted it, setting up the jumps. But maybe not, maybe it was fate, and there was nothing to be done. Maybe it happened after the set up, maybe the rain opened up a hole that wasn’t there before. It was a simple accident. That’s what people repeated until it sounded true.

She’d hit her head on impact. The paramedics didn’t rush. They wheeled her out, perfunctory actions.

She scraped the mud off her boots, watching the ambulance leave.

She saw the blood drip from the jump and heard as sirens wailed in the distance, and she doesn’t remember anything else from that day, no matter how hard she tries. That morning, at 4AM, when she’d walked the jump course, she didn’t remember any holes.

But it was hard to remember things, sometimes.

I have written other (unpublished) novels, and I’ve been writing book reviews. I have written a lot of poetry and shorter pieces. I want to publish many novels in the future, but I don’t know exactly what they’ll be like other than that I really love the YA genre.