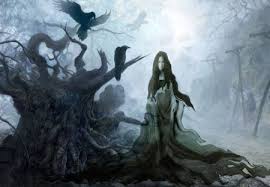 I’m a middle school English teacher, mom of two teenagers, married to a scientist. Outside of work and family I write, sing old jazz songs, and get outside as much as I can. I’m a lifelong book addict who started writing her own a few years back.

I love good writing in any genre, although lately I’m reading mostly fantasy. The Hazel Wood and its sequel, Maggie Stiefvater (especially Scorpio Races and the Raven Cycle), Gregory Maguire (love Egg & Spoon), Naomi Novik (everything). I started my current MG fantasy out of longing for Terry Pratchett’s witches after he died–my main character gets taken in by some fierce old women. Other authors…Jane Gardam makes me swoon. Love Kelly Barnhill, The Trees by Ali Shaw, Markus Zusak (especially I Am the Messenger).

Novels written in verse (not sure why I’m a-verse to these), homophobia, anything too preachy or religious.

When 12-year-old Cindik discovers a source of magic that flows underground, life in her hardscrabble village becomes infinitely more interesting. But the Undercurrent taps into Cindik’s emotions, stirring up subterranean creatures and endangering those around her. When the stern village Council learns about Cindik’s powers, it offers a choice: give up magic forever or live in exile.

Unable to abandon the one thing that gives her joy, Cindik treks deep into the forest to study with two fierce old witches. There she struggles to control her power, amidst encounters with giant stoats, flesh-eating insects, and two other exiled children with mysterious gifts of their own. But Cindik’s effect on the Undercurrent is a beacon for malevolent forces who track her down and threaten everyone she loves. She must use her wits and her magic to save them, sacrificing her freedom—and maybe her life.

CINDIK AND THE UNDERCURRENT is a 60,000-word upper middle grade fantasy in the vein of The Girl Who Drank the Moon, by Kelly Barnhill, and Jinx, by Sage Blackwood, with a nod to Terry Pratchett’s incomparable witches. At this year’s SCBWI Oktoberfest in Northern California, it was a finalist for Best in Show.

A junior high English teacher, I spend my days helping twelve-year-olds tell their stories, and the wee hours crafting my own. Thank you for your consideration.

By the time the wasps attacked, no one in the village was sorry to see Cindik go.

A fever swept through their tiny town that winter. They’d buried Cindik’s father alongside the other dead, marked with stacks of stone. Cindik hated thinking of him alone and suffocated under rocks. She spent her free hours keeping him company, sitting or lying next to his grave. With her face pressed to the ground, she watched new grass spring out of the warming earth. She pushed seeds into the dirt with her fingers and watched the seedlings uncurl under the sun.

It was there that she first felt the tingling in the dirt. Something flowed and buzzed underground, around and between the roots and seeds. At first, she’d drawn back in alarm. Was it insects tickling her? She didn’t see any. A rash? She examined her hands, but under a layer of dirt the skin was smooth.

Curiosity pulled her back. She found the tingle wherever she dug; stronger here, weaker there, high and low buzzes and hums. Soon a part of her listened for it wherever she was. All winter and spring she wandered in the village and the fields, digging with her fingers and even pressing her face against the ground. She noticed which plants grew where, and how the soft hum of a new bean sprout differed from the thrum of a pine tree.

The underground world became everything to her. When the ground warmed, she left her boots at home and walked barefoot. She grew distracted and dirty, with leaves in her braids and thorn rips in her clothes. Folks first thought she was mad with grief, and then just…mad. Children avoided her, or threw taunts and laughed.  It didn’t help that she herself sprouted up, stretching tall and narrow as a stick. A stick with brown braids who wandered, hunched, with her gaze always on the ground.

She tried to explain it to Mother, but quickly learned her mistake. Mother, red-faced, slapped her and warned her to leave the underground alone. But giving it up would be like promising not to breathe.

Also in the works: a “realistic” middle grade fiction about size and voice, with the terrible working title “Take up Space”.

My first “book” is a YA sci-fi that I queried too soon. It’s resting somewhere I don’t have to look at it.