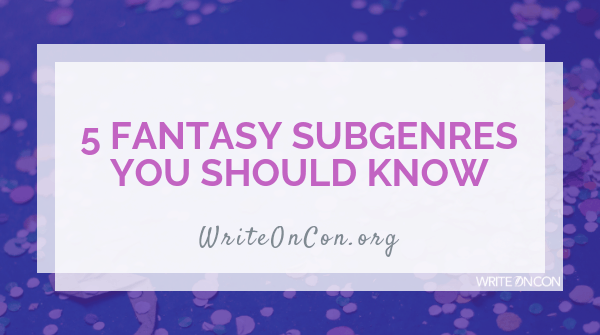 Five Fantasy Subgenres You Should Know

Fantasy is a popular genre that has been booming in the book industry for decades (thank you, Tolkien); however, what exactly qualifies as fantasy? Fantasy is defined as imaginative fiction featuring especially strange settings and grotesque characters. Yet as broad as that sounds, many readers might hear the term and immediately think of high fantasy or fairy tales when there is more to the genre than that. More than enough to make several subgenres. Here is a list, as well as book recommendations, of a few fantasy subgenres that may not cross your mind as often.

A retelling of historical events where magic or other elements of fantasy are involved.

Ink and Bone by Rachel Caine

The Crown’s Game by Evelyn Skye

This subgenre may sound unfamiliar, but you’ve probably encountered it in the past. It is the fantasy equivalent of the mainstream subgenre, “Comedy of Manners,” which focuses on or satirizes the manners and affectations of a social class, often represented by stock characters, such as the fop and the rake during the Restoration. Jane Austen is the classic example of this.

The Goblin Emperor by Katherine Addison

The Beautiful Ones by Silvia Moreno-Garcia

In contrast to “high fantasy”, as exemplified by J. R. R. Tolkien’s The Lord of the Rings, low fantasy is usually set in the real world but with magic or fantastical elements, rather than taking place in a different and imaginary fantastical world. Low Fantasy as a subgenre might stress the grittier, grimmer, more unattractively realistic themes in a fantasy setting. It sometimes refers to stories that don’t emphasize magic overtly, or stories that contain a cynical worldview. Subgenres such as urban fantasy or contemporary fantasy can fall under this umbrella.

A Wrinkle in Time by Madeleine L’Engle

Dragons in a Bag by Zetta Elliot

The Epic Crush of Genie Lo by F.C. Yee

The Hazel Wood by Melissa Albert

Magical realism and fabulism present fantastic and mundane elements side-by-side as if there is no conflict between the two. This is often used to punctuate the hidden meaning of mundane realities by means of the fantastic “magical” elements. This subgenre has close ties to Surrealism and Post-Modernism. Though often used interchangeably, magical realism differs from fabulism in having historic roots in postcolonialism and resistance to oppression.

Me and Marvin Gardens by Amy Sarig King

A Snicker of Magic by Natalie Lloyd

A Million Junes by Emily Henry

Summer of Salt by Katrina Leno

Mythic fantasy refers to stories rooted in fables or mythology. These works are inspired by or in some way draws from the tropes, themes, and symbolism of myth, folklore, and fairy tales. These could be pantheon-based characterizations, or retellings of famous mythological journeys in fantasy settings. This subgenre also overlaps with “Mythpunk,” a kind of postmodern mythic fantasy category.

Aru Shah and the End of Time by Roshani Chokshi

The Lightning Thief by Rick Riordan

The Language of Thorns by Leigh Barudgo

The Storm Runner by Jennifer Cervantes