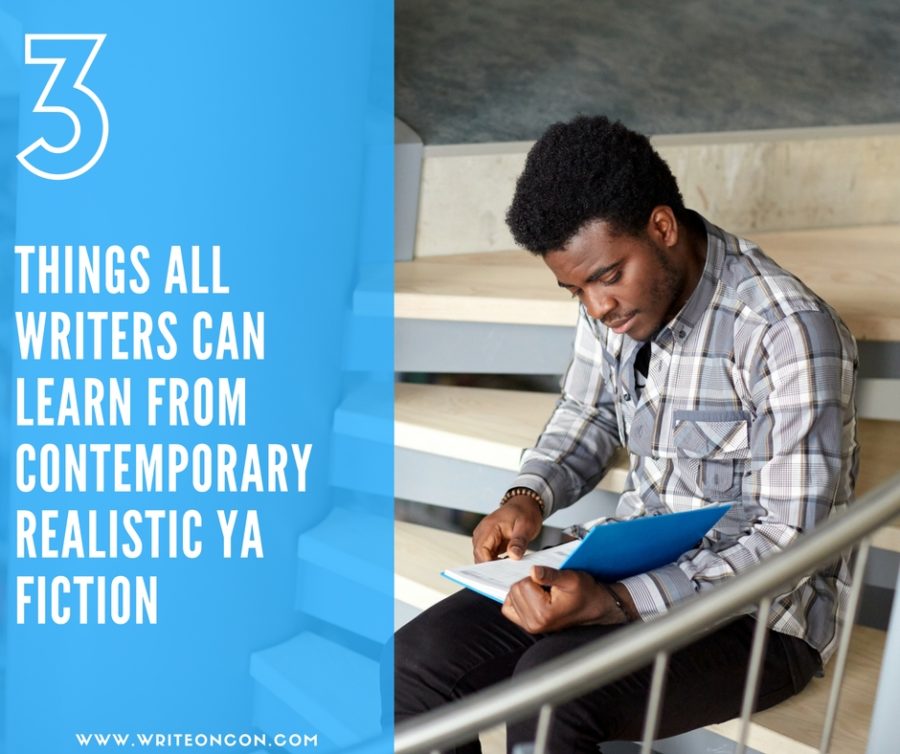 Greatest Hits: 3 Things All Writers Can Learn from Contemporary Realistic YA Fiction

Kelly Jensen is a former teen librarian who worked in several public libraries before pursuing a full-time career in writing and editing. Her current position is with Book Riot, the largest independent book website in North America, where she focuses on talking about young adult literature in all of its manifestations. Before becoming a fully-fledged adult-like person, she worked in the swanky Texas Legislative Library entering data into a computer while surrounded by important politicians, scooped gelato for hungry college students, and spent hours reading, annotating, and scanning small-town Texas newspapers into a giant searchable database. Kelly lives in Wisconsin with her husband, her bunny, and three needy-but-awesome cats. In her free time, she does yoga, writes for her personal blog STACKED (stackedbooks.org), drinks a lot of tea, and enjoys disappearing for days reading good books. Her writing has been featured on The Huffington Post, at Rookie Magazine, The Horn Book, BlogHer, School Library Journal. She contributed an essay and a guide to teen sexuality in pop culture for Amber J. Keyser’s The V-Word: True Stories of First-Time Sex and is the author of the book It Happens: A Guide to Contemporary Realistic Fiction for the YA Reader from VOYA Press. She is a feminist who believes change comes through words and through actions. Her latest book is Here We Are: Feminism For The Real World (Algonquin Young Readers, February 2017) a collection of art, essays, and words from over 44 voices.

Contemporary realistic YA fiction comprises only a fraction of the books published every year, but it offers up some of the best models for writing solid, strong YA more broadly. Because contemporary is limited by what is possible in the real world, these stories require paying attention to restraints — as well as playing against them.

Writers in any genre can benefit from studying these three crucial elements of a successful contemporary YA novel.

Sure, contemporary YA is set in the real world, but for a contemp story to be successful, that real world has to be built. As readers, we need to know where and why the action is set up as it is. Is there a purpose for the story happening in a boarding school? For it being set in an urban center? For it being set on a beach? Setting is the context of contemporary YA; it’s where and how things happen.

Some authors spend a lot more time building their worlds than others. Sarah Dessen, for example, not only builds her worlds within each novel, but many of her books are set within the fictional beach town of Colby. Characters from prior novels sometimes reappear in newer ones, further heightening the world. It’s not singular or removed. It grows and evolves, and maybe most importantly, everyone in Colby has a story. It’s not just the main character of a particular novel.

World-building is not solely about where a book is set, though. It also means developing a dynamic and fluid world within your story. No place in the real world is made up entirely of hollow people. A world full of kind, helpful people is imaginary, as is a world full of evil, thoughtless individuals. World-building works with this, rather than against it.

Kirstin Cronn-Mills, in Beautiful Music for Ugly People and The Sky Always Hears Me: And the Hills Don’t Mind offers up some of the best world-building in realistic fiction that should serve as guides to any writer. Both books feature main characters who have friends and family members who do and don’t live up to their expectations and ideals for support; they feature communities that have people who are good and those who are not-so-good; and their rural and small-town settings are as memorable as the characters and stories themselves. These books are not only about what’s going on in the main characters’ heads. They’re also about how those things interact with the real and challenging world around them.

No person is perfect, and neither is any character. No one only ever has pure thoughts, and no one lives an entirely charmed life (even if it looks like that’s the case from the outside). In strong realistic fiction, a character’s flaws are as important as their strengths. Characters can be wholly likable or unlikable, but the majority of them fall somewhere between.

A mistake that realistic writers — or any writers — can make is creating a character who is one thing in every single situation. This isn’t how the real world operates. Characters change and shift depending on where they are at and who they are with. They’re not snarky 100% of the time; they rein it in with different people, and they let it out with others. Even if your character is funny, there are times s/he knows when it needs to be scaled back. Good, authentic characters are those which shift and change throughout the story, and in some ways, the best characters are those hardest to define because they’re so dynamic and flawed.

One of the most recurring observations in reviews for Courtney Summers’s non-contemporary novel This is Not a Test is that readers felt like they were reading a realistic novel with zombies. This is because Summers leveraged her strengths as a realistic writer when creating her characters. Sloane, for example, isn’t defined by the zombie invasion. She’s defined instead as a girl who is deeply hurt by her abusive father and the sister who abandoned her. She’s at times angry, at other times sad, and at times desperate to end her story on her own terms. But she’s also obedient because it’s something she’s grown up being as a result of her father and at times, she seems like she’s driven to please others, even at the expense of self. And as a character without hope, there are moments when shards of hope poke through. Sloane isn’t 100% consistent, she isn’t 100% likable, and she isn’t 100% pathetic, which make her all the more authentic.

The only way to assess whether dialog works in a contemporary novel is through thinking about whether or not it’s how people would talk in the real world. In many ways, communication in realistic fiction is subject to the sharpest criticism because of this.

Dialog is a part of world-building as much as it’s a part of authentic characterization. Everyone has verbal tics or turns of phrase that are part and parcel of who they are. Dialog shouldn’t be about info dumping — those sorts of moments of intimacy and vulnerability are private and rare in the real world. Instead, dialog should convey just enough crucial information to move the story along.

Have you ever eavesdropped on teens? If you have, you’ll know their conversations hop from thing to thing, and sometimes the most crucial bits are packed within comments about how unfair their mother is being about curfew, about how they didn’t get the last slice of pizza at lunch, about how many split ends are in their hair, about how someone added a new picture on Facebook that made them look super hot, and so forth. Good contemp authors know what to leave in to make their characters real and they know what to cut out to get to the heart of the conversation.

Kody Keplinger may be one of the strongest when it comes to dialog in her realistic fiction. The DUFF, Shutout, and A Midsummer’s Nightmare are excellent examples of how to pepper dialectic idiosyncrasies within conversation while still pushing the plot and story forward. Tiffany Schmidt does not only this, but she also offers up subtle plays of power wielding among friends within her character’s dialog in Send Me A Sign — who is withholding information from another person when they’re conversing and who is spinning the information they do have into an opportunity to be seen as powerful. Suzanne Young, in writing her dystopian The Program, makes her story almost more chilling and powerful because she utilizes authentic dialog (you can in many ways tell she teaches high schoolers simply because she’s pulling from the real world in listening to them and uses that realism even in her own non-realistic stories).

Writers in any genre can and should look to contemporary/realistic YA as a means of strengthening their own work. If you’re looking for places to go beyond the examples listed above, here’s a quick list of suggested reading that are outstanding examples of the three elements noted above:

1. Amy Reed’s Crazy and Over You

5. Sara Zarr’s The Lucy Variations and How to Save a Life

Editor’s note: Much of the old conferences’ material has sadly faded from the internet, so we’re bringing back the greatest hits! This post (originally from AUGUST 13, 2013) is one in a series of best events from previous years. Enjoy!