Ash Van Otterloo was born and raised in the Appalachian foothills, and lived for seventeen years in Eastern Tennessee.

They currently live in the PNW with their best friend and four wild forest-children. They are the author of Cattywampus and A Touch of Ruckus (Scholastic, Fall ’21).

Ash is regarded fondly by a cattle dog, two cats, and a ball python named Sophie Hatter. Whether or not they’re a witch is a topic for gossip among their neighbors. The ones, at least, that they’ve not yet turned into newts. 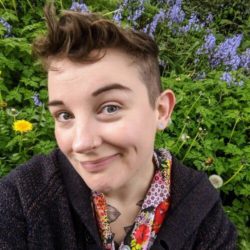