In high school, Carrie marched in the drum line and worked backstage in the theater. Both activities were really just excuses to meet hot geek boys. She followed her boyfriend to college, which was pretty stupid considering that she broke up with him the second week of school. That left her free to date another long string of hot geek boys and play a lot of euchre. In between dating and cards, she got a degree in English Literature but graduated with no plans whatsoever, so back to school she went. She ended up in a graduate program in Educational Statistics with no idea how the bleep that happened.

Then came the string of random jobs. First, she was a market research manager. Then she became an autopsy coordinator/statistician, which is probably the weirdest job combo in the history of the universe. Then she managed the National Prion Disease Pathology Surveillance Center, which is the fancy title for the place that researches Mad Cow disease in humans. She spent a lot of time looking at brains there. That probably explains a lot.

But all that time, she wanted to be a writer. In between all the autopsies and mad cows, she  did a bunch of spec work for tabletop roleplaying games and textbook companies, which is yet another weirdo combo. She loved it. And once her kids were born, she decided she had to take the plunge. She wrote a book about supernatural creatures. Because they’re awesome. Now she writes books for teens, tweens, and adults. She’s also the marketing director for Evil Hat Productions, an awesome game company staffed by crazy people.

Now she lives in Utah with her husband, who is a ninja doctor (fer real), and three zombie obsessed children. The other moms think she’s very weird. She thinks this is a compliment. 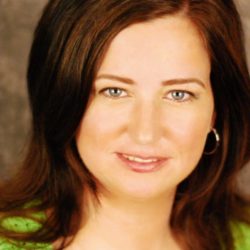