David Brown is the Youth Services Librarian at the Vista Grande Public Library in Casa Grande, Arizona. He has a bachelor’s degree in Television Production from California State University Northridge and a master’s degree in the field of Library and Information Science from San Jose State University. He has worked in both academic and public libraries over the course of his seven year career in the field. He has also worked as a Video Editor for shows on the Food Network and HGTV, and is a trained puppeteer having worked with performers from Sesame Street and the Muppets.

Mr. Brown is also an aspiring children’s author and member of the Society of Children’s Book Authors and Illustrators. He was selected in 2015 as the Horner Fellow for the state of Arizona, which provided him the opportunity to study puppetry and library services for children in Japan. Mr. Brown was also selected as the 2016 Youth Services Librarian of the year for the state of Arizona. When he is not busy writing, Mr. Brown enjoys wrestling with his miniature dachshund Robocop, traveling, and playing bocce ball. 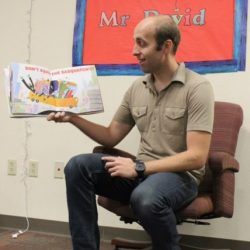