Dustin Hansen was raised in rural Utah, where he drew great inspiration from the outdoor and the rich history that surrounded him. To say that Utah was once a dinosaur playground is an understatement, and Dustin has literally walked in the footsteps of giant in the National Parks and secret locations that have made the state famous, frequently with a sketchbook in his hands.

But that’s not the only history that launched Dustin’s ambitions. Utah has played a major part in the history of video games, from the legendary Nolan Bushnell, creator of Pong and founder of Atari, to the future leading The Void, Dustin’s current employer.

Dustin has turned his passions into a career, where he has worked as a writer and artist in the video game world for more than 20 years. Now he is excited to share his imagination and stories with you in his books, Game On! and the Microsaurs book series. 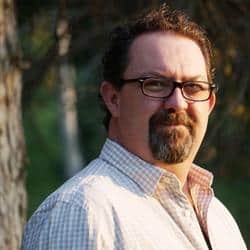