Jocelyn Davies is an Editor at HarperCollins Children’s Books, where she acquires and edits Young Adult and Middle Grade fiction of all genres. She is looking for manuscripts that capture readers’ hearts and imaginations, transport them to another place or time (whether that’s the Pacific Northwest a hundred years from now or Miami today), and explore a diverse range of identities and experiences. Authors she works with include Lucy Keating (Dreamology, Literally), Michelle Falkoff (Playlist for the Dead, Pushing Perfect), Katrina Leno (The Half Life of Molly Pierce, The Lost & Found), Rebecca Maizel (Between Us and the Moon, A Season for Fireflies), Alice Oseman (Solitaire, Radio Silence), Danielle Paige (the Dorothy Must Die series), Laurie McKay (the Last Dragon Charmer series), as well as 2017 debuts Jen Nails (One Hundred Spaghetti Strings), Carlie Sorosiak (If Birds Fly Back), Jodi Kendall (The Unlikely Story of a Pig in the City), and Naomi Cyprus (Sisters of Glass). Previous to HarperCollins, she was an editor at Razorbill, where she worked with Jay Asher, Carolyn Mackler, and Richelle Mead, among many other authors.

Jocelyn is also a YA author. Her most recent novel, THE ODDS OF LIGHTNING (Simon Pulse, 2016) received a starred review from Publishers Weekly and was one of Buzzfeed’s “23 YA Books That Without a Doubt You Should Read This Fall”. Visit her website at www.jocelyndavies.com, on twitter @jocelyndavies, and on Instagram @jocelyndaviesbooks. 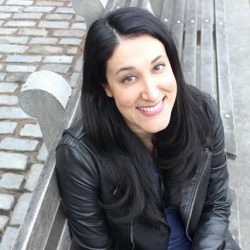