Karen Foxlee is an Australian author who writes for both kids and grown-ups.  She grew up in the outback mining town Mount Isa and still frequently dreams she is walking barefoot along the dry Leichhardt River.

One of four children she started telling stories when she was young. She filled countless small exercise books with sweeping sagas of orphaned girls illustrated with pictures cut from the back of Readers Digest magazines.

She has worked as an underground cable mapper, pool kiosk attendant, library assistant and hotel laundry hand and eventually became a registered nurse.  All the while she never gave up her secret dream of becoming a writer.

Her first novel The Anatomy of Wings was published in 2007. The story of the sudden death of teenage girl in desert mining town won numerous awards including, the Dobbie Award and the Commonwealth Writers Prize for Best First Book.  Her second novel about the disappearance of a girl in tropical north Queensland, The Midnight Dress, won the Sisters in Crime Best Debut Crime Novel in 2013.

Ophelia and the Marvellous Boy, Karen’s first novel for children was published internationally in 2014 to much acclaim.  It was an E.B. White Read Aloud finalist that year.  Her second novel for younger readers, A Most Magical Girl, published in August is already receiving great reviews.

Karen lives in South East Queensland with her daughter and several animals, including two wicked parrots who frequently eat parts of her laptop when she isn’t looking.  Her passions are her daughter, writing, day-dreaming, baking, running and swimming in the sea. 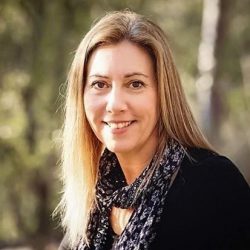