Kosoko Jackson is a vocal champion of diversity in YA literature, the author of YA novels featuring African American queer protagonists, and a sensitivity reader for Big Five Publishers. Professionally, he is a digital media manager for a major nonprofit organization, and a freelance political journalist. He has also recently taken the position as Social Media Manager for Foreshadow: A Serial YA Anthology, through 2019 Occasionally, his personal essays and short stories have been featured on Medium, Thought Catalog, The Advocate, and some literary magazines.

When not writing YA novels that champion holistic representation of black queer youth across genres, he can be found obsessing over movies, drinking his (umpteenth) London Fog, or spending far too much time on Twitter. His debut #ownvoices Historical Thriller, A Place for Wolves, will be published by SourceBooks Fire, April 2nd, 2019. 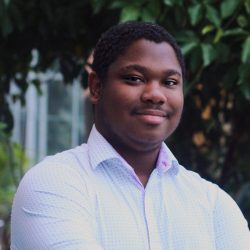