Nicola Davies doesn’t remember a time when she wasn’t fascinated by animals. From the moment she could walk she was out in the garden watching ants and worms, and collecting snails as pets.

She had her first pair of binoculars for her eighth birthday. They were so big, she couldn’t hold them steady for more than a few seconds. She can still remember the very first bird she saw through them: a male blackbird with his golden-yellow eye ring and sooty black feathers.

Her first job was studying geese in Scotland, her second was hand rearing jackdaws and her third was watching humpbacked whales from an uninhabited island in Newfoundland! In the last two years she’s returned to studying animals and has been helping out on a long term study of sperm whales, sailing in the Sea of Cortez, and the Caribbean off the island of Dominica.

She’s seen all sorts of animals, all over the world: chamaeleons in Madagascar, turtles in the Seychelles, walruses in the Arctic, bat eared foxes in Kenya, salt water crocodiles in Australia. But she still loves the animals that are within reach of her home in Wales: the ravens and red kites, the grey seals and the choughs, the roe deer and foxes, even the blackbirds that nest in her tiny garden.

Read more about Nicola Davies: 2015 AAAS/Subaru SB&F Prizes Honor Science Books That Encourage Exploration, Why I Wanted to Write About Disability, Why I wrote a book about having a disabled sibling – in pictures, The Day the War Came – a poem about unaccompanied child refugees. 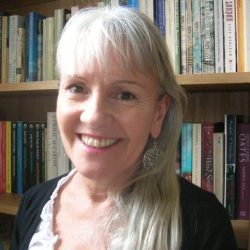