Rine Karr is a writer and aspiring novelist by moonlight and a copy editor by daylight. Originally from western New York state, but currently living in the shadow of the Rocky Mountains, she spent four years in northwestern Pennsylvania, two years in Washington DC, and has also lived in Hong Kong and London. She studied anthropology, archaeology, and religious studies as an undergrad, and international human rights, political economy, Buddhist studies, and Buddhist art in graduate school. Rine is still waiting for her Hogwarts letter to arrive, but if she’d attended the famous School of Witchcraft and Wizardry, she would have been in Ravenclaw house. Fortunately, she’s found other ways to kindle her magical proclivities and embrace her geeky passions in her free time. She’s the former Chief Copy Editor and an occasional contributor at Women Write About Comics, for instance, as well as an Anime Writer at Girls in Capes. She’s also currently in the midst of writing a novel. 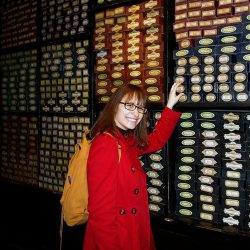