An inveterate scribbler since childhood, Rowena began writing children’s fiction seriously in 2007. Her first completed manuscript — a magical realism MG adventure — got as far as the editorial director at Hodder before being rejected, but by then she’d applied to the MA in Writing for Young People at Bath Spa University, and was lucky enough to win a place on this fantastic course. While there, she won the Bath Spa-Andersen Press WW1 short story competition, the prize for which was publication in War Girls (2014). That short story inspired her debut novel, a coming-of-age quest set in France in 1916, which will be published by Walker Children’s Books in April, 2018. Hurrah! (Title To Be Advised — perhaps at WriteOnCon!) Her WIP is a contemporary, magical realism romance, but she intends to return to historical fiction after that. She’s also training with the Golden Egg Academy to edit children’s fiction while continuing with her day job as a journalist. As an ex-Reuters’ foreign correspondent, she’s lived and worked in France, Kenya & Belgium, and reported from dozens of countries in Africa, Europe & America. Married with a teenage son, she now lives in rural Devon. Hobbies include wildlife gardening and walking their Aussie sheep dog on the nearby coast paths. 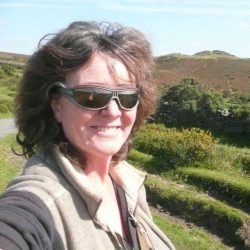