SD Stanley, more commonly known as Sue, grew up in a practical family and spent many hours confusing them by weaving fantastic tales of wonder. She was first published in elementary school, a snappy Haiku poem about snow, and has never stopped writing. As a teacher, she wrote most of her harrowing tales on referral slips to the office, but kept herself entertained by adding context to the notes — “Jose has a bloody nose. We are suspicious he was attacked by a dragon in the library, but no one knows for sure…”

In later careers, she has had the enormous pleasure of working with publishers, training teachers, and developing instruction on many fascinating subjects.

She is currently a senior instructional designer for a major public speaking organization where she is writing full time and continues to work incessantly on building her craft as a fiction writer.

She holds a degree in History from UCLA and has completed graduate work at U.C. Irvine and CSULA. She makes her home in Southern California with three children and a dog named Nox. 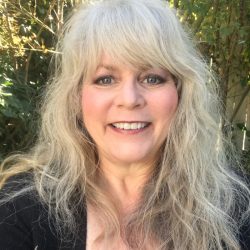