KEYNOTE: The Journey to Sightwitch

Let me tell you about a book that was both one of the hardest things I’ve ever written and also the easiest. This tale begins in the Spring of 2014, after turning in a first draft of Truthwitch to my editor.

Actually, let’s back up a bit further to 2012, when my first book, Something Strange & Deadly, released. It was a deeply underwhelming performance, so it was no surprise when, the following year, the sequel performed even worse. (Also, in case you’ve ever looked, the dust jacket for book one is fancy…and the dust jacket for book two is not. This is entirely thanks to the terrible sales.) I lived in daily terror of the series being cancelled.

Shockingly, HarperTeen published the final book, but of course, it sold in the double digits, and at that point, my career was essentially toast.

Here’s the thing: bad sales hurt an author more than no sales. Which is why, frequently, authors change their names. We have a higher chance of selling as a “debut” than an author with a terrible track record.

I was tired. I was desperate. I really didn’t want to have to lose my name—after all, Susan Dennard was quite popular for her writing advice! Too bad, no one actually read her books. So when Tor Teen took a chance on my epic fantasy, I was ecstatic. I mean, ecstatic. This was my second chance. My only chance, really, to turn my career around.

Which was why I set out to self-publish a novella in Spring of 2014. It was going to be an entry point to the series that I could offer at low (or no) cost, and readers who were hooked on Sightwitch, would then pick up Truthwitch once it released. Brilliant, I thought! I was harnessing the power and control that comes with the indie publishing world, and I was using that to supplement my sad traditional publishing life.

You see, although I had a setting (this is actually why the Sightwitch Sister Convent is on the Witchlands map in Truthwitch!) and although I had my characters (Ryber, Kullen, check!), I had no story.

Oh, I thought I did, but when I dove in to start writing… Well, turns out that just because a story makes sense in outline form does not mean it will work in actual book form.

For months, I spun my wheels and made no progress. Part of the problem was that I had no real connection to Ryber’s voice yet. She was a secondary character in Truthwitch, who, though she had her own agenda, really hadn’t formed into a 3D person in my head. The same issue existed with Kullen. I did not know who they were, and every story I tried to write with their POVs was agonizing.

I did, at least, have enough experience back then to know that if it feels like pulling teeth to write a scene, then the scene is probably wrong. And in this case, every scene was wrong.

To make it all the more shameful, I had decided to offer a free writing course to go alongside my drafting. “Write a Book with Sooz” it was called, and I was going to share my first draft, outlines, revisions, etc. as I created them—along with lessons explaining the steps and craft behind it all.

I was failing. I was failing, failing, failing and the 100+ people who had signed up for my free workshop got to witness it firsthand. Yes, I always have a few false starts with a new project, but this was a whole ‘nother level. This book simply did not want to be written.

Wanting to Give Up

After almost eight months of suckage, I gave up. I told everyone in the workshop, “I have to stop to work on Windwitch,” and I tucked all my Sightwitch notes and drafts into a drawer where I’d never have to see them again.

I cannot even express to you all how embarrassed I was by the whole failed fiasco. Nor how much I doubted and hated myself. This was supposed to be my career-saving move, and I had face-planted before even leaving the starting block.

Can we cue another laugh track here? Because if I had only known the pain and failure and deep, dark hole of anxiety that I would soon fall into because of Windwitch, I’d have thought that whole Sightwitch thing was a cinch.

I started working on Windwitch in Fall of 2014. I did not finish it until Fall of 2016. That is the longest a book has ever taken me—at least a book that I have worked on day in and day out. I could not find the story. I could not see how all the plot threads connected. Nothing felt right. I threw out >200,000 words (I stopped counting at 200,000 because it just got to be too depressing), and I even turned in an entire first draft to my editor! Only to then, two weeks later, say, Lol. Delete that file, I’m starting over.

Looking back, I can see where I went wrong. And I’ve written at length about that in my newsletter (here’s one of the issues, in case you’re curious, and here’s another). If you had asked me a year ago, Was it worth all the heartbreak? I’d have said yes, since Windwitch did ultimately come together. But I definitely would have traded the heartbreak for an easier, faster book.

If you ask me today, Was it worth all the heartbreak? I will give you a resounding YES! The reason being that not only did I learn about my creative process—so much so that I have completely transformed the way I write—but also because three years after I started it, I actually managed to write Sightwitch.

“Managed” is an understatement. That book erupted from me, and it was hands down, one of the most joyous creative experiences of my life. After three years of letting the story simmer and grow and connect, I now understood who Ryber was. I had a clear idea of the world and how all of the story arcs wove together. I saw how to take the Sightwitch Sister Convent setting to a whole new level and depth. Basically everything that I’d tried to force from my brain in 2014—like trying to squeeze an already dried sponge even drier—was now there for the writing.

Because of that experience, I finally learned that “simmer time” was key to my process. Oh, I’d heard that advice—and given it!—before, but I did not fully comprehend the degree to which my own muse relied upon it. Looking back I could see that Windwitch all came together 1.5 years after I started working on it. In other words, after 1.5 years, the ideas had simmered long enough, and the muse was ready. That last (and final) version of the story actually came out quite quickly.

Sightwitch was no different, except I’d had even more simmering time, so I wrote that story even faster. And I truly loved every second.

Write Your Way, and Don’t Give Up

Now, as I pick away at Bloodwitch, I am trying to lean into what I’ve learned about my muse. Rather than attempt to write everyday (as I always used to do), I move through three phases: from creative input and vague brainstorming, to outlining and more concrete brainstorming, to the actual writing of words—then I circle back again when the words peter out.

The Witchlands series as a whole requires much more simmering time than my first series did, which makes sense considering the difference in sheer scale and complexity between the two. But I’ve learned to embrace this, and instead of falling into a panic every time I get “stuck,” I now know to simply step away and trust that when my subconscious mind is done doing the heavy lifting, it will provide.

I have also learned to accept that, at least with this particular series, I will never be a fast writer. And that’s okay. At the end of the day, I would rather write the Right Story and love every second doing it than try to conform to a multi-book-a-year model that simply doesn’t work for me. There’s no shame in being slow, no shame in not writing every day, and no shame in needing heaps upon heaps of simmer time. Everyone creates differently, and enjoying the ride is what matters most in the end.

And that, my friends, is what Sightwitch taught me. It’s why it has been both the hardest and the easiest book of my career, and why, given the chance, I wouldn’t go back and change a single day of all that heartbreak.

Leave a comment below to be entered in a drawing for a copy of Sightwitch! 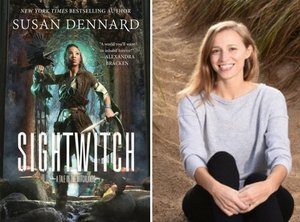 Susan Dennard has come a long way from small-town Georgia. Working in marine biology, she got to travel the world—six out of seven continents, to be exact (she’ll get to you yet, Asia!)—before she settled down as a full-time novelist and writing instructor.

She is the author of the Something Strange and Deadly series as well as the New York Times bestselling books Truthwitch and Windwitch, and Sightwitch. When not writing, she’s usually slaying darkspawn (on her Xbox) or earning bruises at the dojo.

She lives in the Midwestern US with her French husband, two spoiled dogs, and two grouchy cats. Learn more about her on her blog, newsletter, twitter, or Instagram.