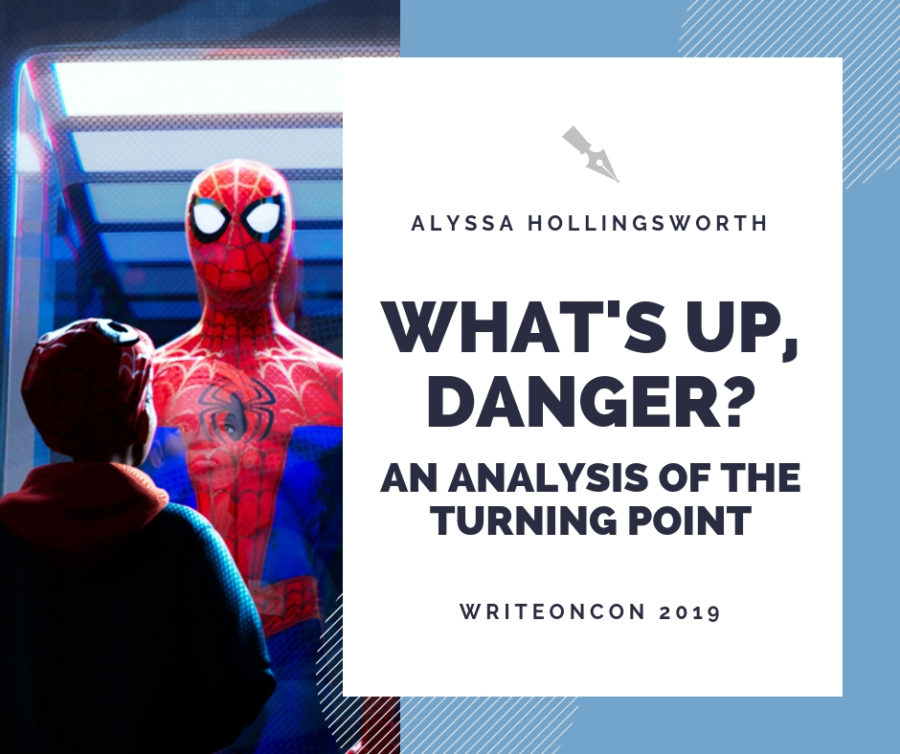 Hopefully by now, you have seen (or at least heard about) the 2018 release Spiderman: Into the Spider-Verse. Everything in this film — animation, writing, music — is completely stunning.

Today I want to talk about what is possibly the most famous scene: What’s Up, Danger?

Take two and a half minutes to enjoy this clip (whether or not you’ve seen the movie):

Ahem. Let me put my professional hat back on.

This scene comes at the point of the story that’s traditionally called the “Turning Point.” It’s a quick beat between the start of Act III (which sets up the stakes for the final battle) and the Climax (where your character proves who they’ve become).

The Turning Point can be a tricky one, partially because new writers tend to rush through it (or forget it altogether). That was a repeated mistake in my first manuscripts — I wanted to jump straight from the upped stakes into the middle of the climactic fight.

But to miss this scene would be missing a vital step in your protagonist’s journey. So let’s go through and analyze what Spider-Verse can teach us about the Turning Point.

Right Before the Turning Point

Some real quick context (AKA a crash course in story structure):

Though Miles has been wearing a cheap Spiderman costume throughout the film, this is the first time he looks at himself and sees someone worthy of being Spiderman. His chin lifts. He’s determined and confident.

We hear voice overs from other conversations Miles has had throughout the film — starting with a clip from his dad’s talk in the previous scene, and then moving back through other moments where story themes were stated by his friends and mentors.

So important in all of this is that everywhere we see Miles moving (the shed/secret hideout, the train station, the building) are places he has been before in his story. More about this later.

The scene alternates between quick cut moments (Miles approaching the shed or standing in a subway station) and slow, gorgeous shots of Miles preparing to jump.

In your prose, you can replicate this feeling. The Turning Point holds a lot of narrative weight — it is important to your protagonist’s journey of change — but it also can’t lose momentum because you’re racing toward the climax now.

The time has finally come: A leap of faith. Miles pushes off from the building.

My absolute favorite thing here is the detail of the glass shattering. Not only is it just plain cool, it actually is telling the audience something about how Miles feels. We learned earlier in the film that Miles sticks to stuff when he is nervous or afraid, and can break seamlessly off things when he is relaxed.

So what’s this clip saying? Miles is literally pulling himself off the building. He shatters the glass because he’s still not a thousand percent sure about this. It’s a teeny tiny, half-second glimpse into Miles’s emotions — and it’s so freaking awesome.

The Point of View

Arguably the most famous shot in the movie (and well deserved), this serene moment is also a good reminder of point of view. Miles is falling up — almost flying — from his point of view.

This gif isn’t actually from the clip I’ve grabbed (and I’m terrible at making my own gifs) so don’t judge. But it does capture the close-up of Miles’s customized costume.

Earlier, we saw Miles stand in front of the traditional Spiderman costume and realize he’s ready to be a hero. There’s a millisecond in the theatrical cut of this scene where we see him pull out his spraypaint and start shaking it. And here, we see he’s made the suit his own.

If you’ve watched the full Spider-Verse movie, you’ll notice that every part of this sequence is mirroring scenes from the first two-thirds of the film. (Except the office building bit? I don’t remember that, unless maybe it harkens back to him breaking into the bad guy’s office/evil science lab…)

Anyway. These spaces were obstacles earlier in the story. Miles accidentally got dragged by a train (along with Peter Parker, mistakenly identified as “a homeless man’s corpse” by the police) in a great comedic scene. We also saw Miles fall (with the text “aaaaahhhh”) between two buildings, the same way we see him jump up (“wooooo”) between two buildings here.

All of this mirroring proves to the audience just how much Miles has grown. He’s overcoming and thriving in the environments he couldn’t handle earlier — and he’s not perfect at it, but it’s a thrill to watch.

Also, notably (and as I mentioned earlier), these are all familiar settings.

My impulse at this stage in my own writing is to panic and throw stuff at the page — often including entirely new locations and sets. But narratively speaking, it is far more effective to take a setting the audience already knows and turn it on its head — show it in the new light of the person your protagonist has become.

Ready for the Climax

The scene ends with Miles arriving within sight of the end battle location (the shiny hotel in the distance). He’s pumped. Even if he’s still not a total pro, he’s prepared — he knows it, we know it. This kid is ready for the boss level.

So what do you all think? Did I miss any important clues from this scene? Am I entirely too in love with this movie? Leave a comment and let me know!

Alyssa was born in small-town Milton, Florida, but life as a roving military kid soon mellowed her (unintelligibly strong) Southern accent. Wanderlust is in her blood, and she’s always waiting for the wind to change. Stories remain her constant. Alyssa received her BA in English with an emphasis in Creative Writing from Berry College and her MA with honors in Writing for Young People at Bath Spa University. In 2013, she won a prize from the Elie Wiesel Foundation for Humanity for her creative non-fiction essay, Naan in the Afghan Village. She’s worked for as a Now Novel writing mentor and a blog formatter for BookBub.

Alyssa is represented by Amber Caraveo at Skylark Literary. Her debut The Eleventh Trade – “a powerful story of love, loss, friendship and hope, centered around Sami, a young refugee from Afghanistan now building a new life with his grandfather in Boston” – came out Fall 2018 with Roaring Brooks/Macmillan (U.S.) and Piccadilly Press (U.K.). Her second book The Invisible Boy releases Summer 2020.