You Should Consider Breaking Up With Social Media (2019)

Matthew Landis is happy to present a vlog on breaking up with social media. Have something to add, or a question to ask? Leave a comment below!

“Your Addiction to Social Media Is No Accident” – Julian Morgans, VICE

“How better tech could protect us from distraction” – Tristin Harris, TEDxBrussles 2014

Irresistible: The Rise of Addictive Technology and the Business of Keeping Us Hooked by Adam Alter

So You’ve Been Publicly Shamed by Jon Ronson

“The Online Disinhibition Effect” – John Suler, Ph.D., Cyberpsychology & Behavior, Volume 7, Number 3, 2004 (Hint: You can read this for free by using ACADEMIA and signing in with Google.)

Turkle quote about technology as “soda water” – Alone, Together: Why We Expect More From Technology And Less From Each Other by Sherry Turkle

The Circle by David Eggers

Further Reading/Viewing On This Topic

Ready Player One by Ernest Cline

“We Live In Fear of Online Mobs“

“The Toxic Drama on YA Twitter” – Kat Rosenfield, VULTURE

“Is the internet evil?“ 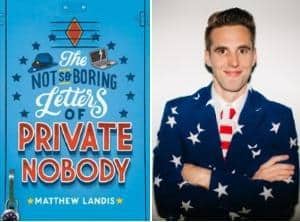 Matthew Landis teaches middle school history outside Philadelphia, where he seeks to make the past come alive in not-boring ways. He is a closet HALO fan, and can sometimes be found reading novels adapted from that video game. He is blessed with an amazing wife and two kids, and hopes to one day write a book that moves people like Lev Grossman, Jo Nesbo, or Ron Rash have moved him. He is the author of YA Thriller The League of American Traitors (Sky Pony Press, 2017) and MG fiction The Not-So-Boring Letters of Private Nobody (Dial/Penguin, 2018). His forthcoming MG novel, It’s the End of the World as I Know It (Dial/Penguin, 2019), features an 8th grade boy turning his backyard shed into a doomsday shelter in order to survive the apocalypse.